Peanuts: Hardworking Himmy did this post a long time ago but I was on vacation so no time to edit it. I had a good time but didn’t manage to meet Wallace 😦 It may take a bit longer as I need to catch up on work but we’ll definitely finish the recaps so don’t abandon us or Wallace 😛

This is the episode which everyone has been waiting for. Be prepared to swoon over Wallace’s sexy dance moves 😉 Girls, I also have something extra for you.

Wallace was the first to wake up in the morning, such an early bird.

Wait, how can he wake up with perfect hair? He didn’t wash his hair last night? He applis gel to his hair before going to sleep? Or he just looks perfect from head to toe all the time? It is unlikely that he woke up and styled his hair before they re-shot his wakeup scene… Or is he using some magical shampoo? Can someone help me to ask Wallace?

Of course he needs to make sure he looks picture perfect before stepping out of the dorm. That’s very Wallacian, so nothing extraordinary here. But the best part is, he was using the camera to do it, so we get to see everything up close! I could watch this for 30 minutes >.< But sadly they have to attend classes, sob sob.

Wallace climbed the stairs all the way to his classroom on the 7th floor, while the others took the lift (I thought students can use the lift only after 7th floor?). Our Wallace is such a honest baby, always following the rules. Although he rushed all the way to the class, he was still 1 minute late. When his classmates told him he was late, Wallace gave all kind of excuses such as he reached the class earlier but went out again. He also said their clock was fast.

When the teacher arrived, he said even the teacher was late. But his classmates were all on the teacher’s side saying the teacher didn’t come late. Although Wallace tried to gain the sympathy of his classmates, it was useless. At that moment, Sean arrived and brought breakfast for Wallace. In the end, they cannot escape from being asked to do push ups. The never give up. Wallace still tried to make a last ditch attempt to save himself by saying although he was late, his heart was already in the class.

They needed to do 50 push ups as requested by their classmates. While Wallace was doing the push ups, Sean counted from 200 and jumped all the way to 400. But Wallace being honest again said he only did 34, yet the teacher let him off anyway.

During history class, the teacher showed a picture of Wallace in the Mao Suit (also known as the Zhongshan suit) which I assumed was from the drama Linked in Countless Ways. With that being said, this is one of Wallace’s least popular drama back in year 2003. No, I didn’t watch it because I can’t even find any of the videos on YouTube.

Then, the teacher brought out the real thing and asked for volunteers to try it on. At first, Wallace’s classmates were cheering for him, but Wallace shouted Sean’s name to pass the cheering to him. Thus Sean put on the Mao Suit.

The teacher asked Wallace why there are four outside pockets on the suit. Wallace was able to answer it correctly because he had answered the same question on a television show a few years back.

Wallace’s expression was priceless when the teacher took Sean’s phone .

During the break, Sean suggested all the transfer students joining the Kpop club. Wallace went to Calvin and Kelly’s class to discuss with them. He was torn between the psychology club and the Kpop club. In the end, they decided to join the Kpop club. (Best decision ever, based on what will happen at the Kpop club later)

While Wallace was talking, suddenly someone said, “My mom wants to take a picture with you.” I suggest her getting in the queue first.

Their club activities included learning the dance move of the song “Call Me Baby” by EXO. Later the teacher will pick the person with the best dance move to dance solo. Sean said he can already suggest Wallace to the teacher.

Wallace was able to tell that Marina is a ballerina based on her dance moves.

As expected the teacher pick Wallace to dance solo. Damn it, he was so good. He looked like he’s one of the EXO members.

Wallace is really talented as he was able to memorize all the dance moves and danced so well in such a short time. I have always thought that if Wallace didn’t become an actor, he might be a successful dancer.

After that, they learnt how to make the Kimchi Gimbap. Honestly speaking, Wallace’s Gimbap doesn’t have a nice shape, but I would love to have a bite nevertheless. (It would be better if the person who made it can feed me lol)

During lunch, Wallace was complaining that even the plain vegetable dishes in the canteen is spicy. The only dish that was not spicy is the omelette, but it was sold out. Wallace was very upset that there was no more non-spicy food for him.

Seeing Sean was sleeping in the class storeroom, Wallace wanted to sleep too. But there was not enough space in the storeroom, so he slept on his table. He woke up after the bell rang, and found his face covered with saliva.

Wallace was trying hard to cover up and hoped no one saw it. “You saw nothing.”

His eyebrows are still so lively even when he is asleep. 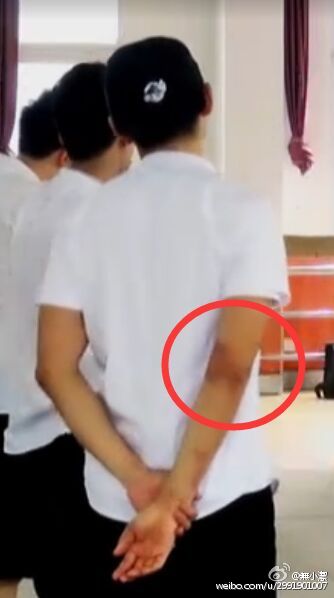 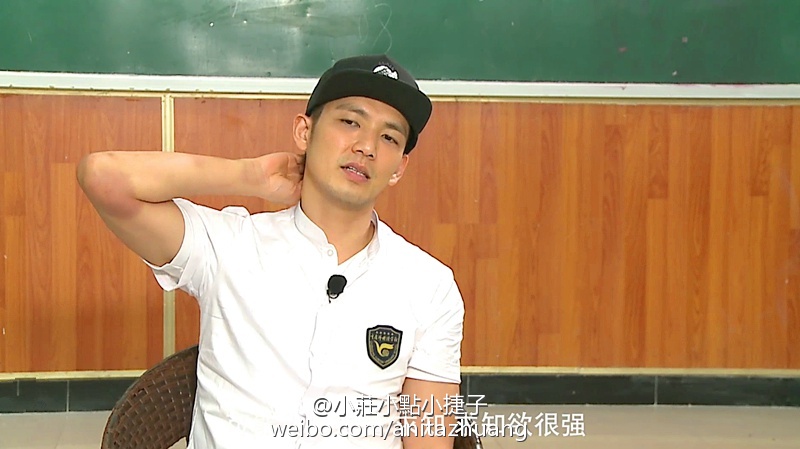 Wallace still has bruises here and there on his elbow 😦

Wallace was sleeping in class again, until the Chemistry teacher came in. Wallace did well when being asked to revise what had been taught in the previous class or to answer question, despite being just woken up.

Then the teacher told them to turn in their homework but both Wallace and Sean had forgotten about it. Therefore they had to follow the teacher to the office to discuss about their punishment.

Wallace admitted his mistake sincerely without giving any excuse. He also volunteered to copy all of his classmates’ homework as punishment, which is impractical. Then he volunteered to help the teacher to carry his experiment equipments with Sean. It was settled with a sudden high five.

After school, Wallace visited his classmate’s dormitory and asked them about homework. Suddenly the dorm building manager gave a surprise visit. He scolded Wallace for not wearing the school shirt and shooed him out. Thus Wallace’s classmates went to his dormitory instead, to teach him how to do the homework. See, our Wallace was so hardworking while others were playing games.

During the placement test, Wallace said he didn’t do those questions which he was uncertain of to let the teacher think that he’s not good at it. So later, he can impress the teacher by making great progress. He was also praised for being so hardworking for having memorized the homework assigned him the day before while many students didn’t even do it. Wallace said that it might be because he likes to learn new things and gain knowledge.

Here’s a fan recording of their “Call Me Baby” performance on stage. I’ll put it here first for you all to swoon over before we post the recap for episode 8 where it will take place. Enjoy~

In the next episode, Wallace will kiss Sean! What!?