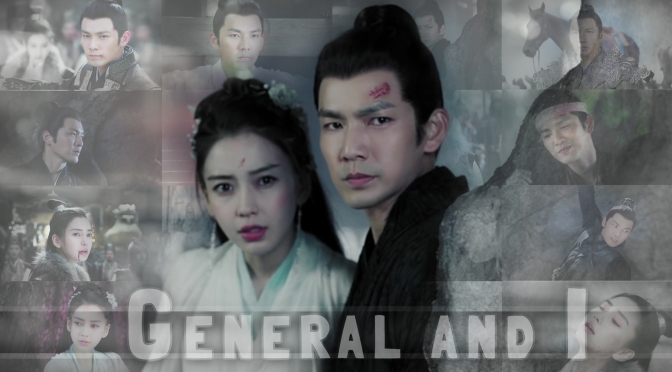 The big conflict in the romance department in General and I really occurred in episodes 13-16. PingTing finally lets her guard down and makes sure BeiJie knows how much she cares for him. However,  their love is quickly put to the test and there’s one battle after another.

Another episode devoted to the OTP

CBJ: Stop hiding and come to me.

Chewywon: It finally dawned on me why PT chose CBJ. She feels safe with him and there’s equality in the relationship. She has been taking care of the people around her all her life. In BJ’s embrace, she can say “I’m tired.”

She such a smart and calculating lady; no one can really fool her. Hence, it would be difficult for someone like her to fall wholeheartedly for BJ (who is her enemy). I could see what an important role the childhood story plays in PT’s trust. When she reminisced about the brief encounter with BJ in her childhood, she sees him as another HX. Later on, she gave an answer to HX’s question about why would she chose BJ of all people. She simply tells HX, that he is exactly the same as BJ. They both have killed so many others who also have parents and other family members. There is no good ending to seeking revenge, in her opinion, and BJ listens to her.

Chewywon: When I look at scenes like these, I see only PingTing and BeiJie. That’s how convincing their chemistry are on screen.

Chewywon: I really think Angelababy is doing a fine job in this drama. I could see the potential in her. At least, she is able to give me all these emotions when I screen caps. Whereas someone who’s at their peaks, like Tang Yan and Yang Mi, they have been for the most part still expressionless. I remember screen capping for My Sunshine and Tang Yan just gives me the same face and her next project afterward Diamond Lover isn’t any better either. Granted, she did improve in Princess Weiyang for the few scenes that I’ve seen. In Angelababy’s case, when she is on the screen with tears welling up, I feel for the character (that’s all we really ask for from an actor).

Episode 15: History of CBJ and the King

My BJ is being tortured again! I can’t even look (I hope you are happy writer!!! Would it kill you to just leave CBJ’s as mighty as he is in the novel…after all that’s why fans love the novel…..DAMN YOU!!!!! For now I will not be putting any torture images of BJ. God bless my weak heart).

BJ:    I’ll give you one last chance to defend yourself. Did you produce the drug?
PT: Yes.
BJ: Did you come up with the strategy for the Liang state to make us retreat?
PT: Yes
BJ: Did you give the order to poison the two princes?
Obviously not true, PT turns around, her tears welling up.
PT: Yes.
BJ: Why did you still come here when only death awaits you? Look at me!

BJ: I remember that your majesty promised BT if she died in our state, you would return her corpse to her hometown. I beg your majesty to release this man (ZY). He came here alone courageously to save his friend. He is a warrior. Allow him to escort PT’s body back to her hometown to be buried. Your subjects will be impressed that you’ve kept your word. Your people will praise your majesty for being broad-minded and compassionate. Please grant me this wish.

On a side note this drama is full of childhood love: PT and BJ, PT and HX, Consort and BJ, King of Jin and his queen…really scriptwriter…there are no other ways people could fall in love?)