May was quieter than April…

We don’t know where Wallace was most of the month, but on May 25, he probably dined with his assistant Zhang Zhen to celebrate their 11-year collaboration. 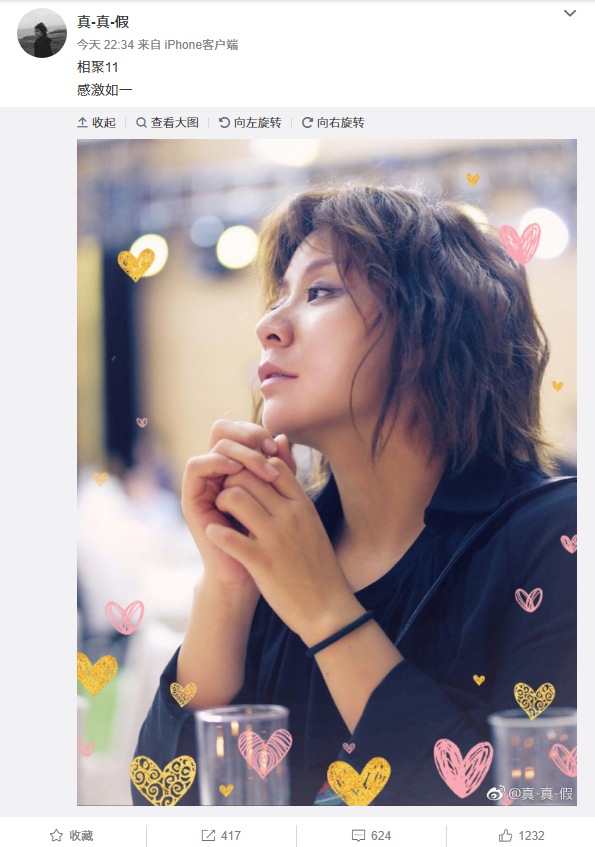 Zhang Zhen wrote on Weibo, “11 years together, grateful as ever.”

If you recall, last year Wallace posted a long message in celebration of their working relationship:

Just finished filming [for the day]. Xiao Zhen [Little Zhen. “Little” is used before someone’s first name to show affection.] handed me the script for tomorrow’s filming. I recalled that the day before yesterday we finished work around dinner time. Someone said that we had not had a group dinner for a long time, so we decided instantly to go have dinner together. Xiao Zhen still kept herself busy while everyone else was joking around and stuffing their faces. They were hungry so they ate to their hearts’ content, which explains what the word “satisfied” means. Xiao Zhen suddenly spoke of what happened when she first met with me. She said, “That day was May 25, 2007!” The other people screamed, “Wasn’t that today ten years ago?” Everyone was happily stunned! Xiao Zhen said, “I went to a beauty salon near Jing’an Temple to meet you. You were getting a haircut there. You were wearing a white T-shirt, dark-colored jeans, and a pair of very white sneakers. Later you took me to work. In the car, you turned around and asked me what my name was, and after thinking for a long time you said you would call me Xiao Zhen.” When Xiao Zhen talked about those things, I immediately felt I went back to those days, all the memories replayed before my eyes vividly. It turns out that it is going to be the 11th year for Xiao Zhen to work as my assistant. We experienced so many things together…We went to the set with the extras in a Jinbei [Chinese car brand] van; the place we lived in back then had a leaking problem when it rains; we huddled together in a small corner and had lunch served in partitioned boxes; she held the script and rehearsed the lines with me; we had contests of memorizing the Tang dynasty poetry and the ci poetry of the Song dynasty. Since I started filming [in mainland] in 1999, I had been used to taking care of myself. Then Xiao Zhen appeared. To this day the macro environment for filming is constantly changing, but we still keep learning. It is so nice to feel motivated like this. There is a sentence [Zen proverb] that goes, “The person who drinks it knows best whether the water is hot or cold.” At this moment I think of the staff members working around me. Grateful. Thank you all.

The weibo was written in plain words but it is pretty moving. Wallace coupled the weibo with nine pictures of or with Zhang Zhen over the past ten years. The one at the center has a caption, “Don’t look down—the crown will fall.” The caption is an alternative of “Keep your head up, princess, or else the crown will fall.” The alternative got popular about two years ago in China. You can read the original weibo here.

Last but not least, the 72-episode All Out of Love will air on Hunan Satellite TV and iQiyi in July. On May 17, Wallace “appeared” at the 2018 iQiyi Technology & Entertainment World Convention in a short clip. He joked, “Good news, good news, good news. The important thing should be said three times!” The important thing was the airing of All Out of Love of course. He said the whole cast and crew are looking forward to the drama. He also wished the convention a great success.