The press conference for Wallace’s new drama, All Out of Love was held in autumn on Saturday, 15th September 2018 in Beijing. All four leads, Wallace, Sun Yi, Ray Ma and Alan Yu, plus director Liu Jun Jie were in attendance to promote the screening of the drama which is due to air on Monday, 17th September 2018 on Hunan TV, iQiyi, PPTV, Tencent and Youku. For those who need English subtitles, Viki will provide it.

The conference kicked off with the introduction of the four leads, the director and personnel of the production company, iQiyi, PPTV and Hunan TV. Then a few trailers were shown. The first to go on stage was Alan Yu who acted as Wallace’s younger brother Cheng Tian En. After that, the Sheng Sheng CP (couple, referring to Sun Yi’s and Ma Tian Yu’s characters here) was on stage. They exchanged gifts. Ray gave Sun Yi a bowl of plain noodles because Jiang Sheng loves to eat the plain noodles cooked by Liang Sheng. In return, Jiang Sheng gave Liang Sheng a bouquet of ginger (Jiang) flowers.

Then the MV for the theme song called, ‘A Love Without Sadness’ (不憂傷的愛) was broadcast. If Viki doesn’t translate it in their subbing, we’ll get our expert Haha to do it later. After about 28 minutes into the video, it was the Tian Sheng (means natural in Chinese) CP’s turn to go on the stage. Wallace said although they are not a natural pair, they are a nurtured pair. Chewywon, what do you think of Wallace’s clothes? I am sorry to say that I find it very similar to what the people in the beggar clan in wuxia drama wear 😛 Luckily Sun Yi’s outfit was also rather casual and matched with Wallace’s.

WC: Hello everyone, I am Cheng Tian You on All Out of Love. Is the MV nice? Wait, your reply is not important.

Cheng Tian You turned to Jiang Sheng and asked her if it was nice or not. Wallace seemed a bit embarrassed about this. This is because he was trying to lead everyone into his character Cheng Tian You who thinks the world of Jiang Sheng so only her opinion matters 🙂 Wallace continued to explain the personality of his character. Yes, our girly hearts are beating wildly and in awe of his MV lol.

There is now a saying: It takes cultivation of a hundred years to get Lu Li Cheng (Best Time), a thousand years to get He Yi Chen (My Sunshine) and ten thousand years to get Cheng Tian You (All Out of Love). Do you agree? The host asked what is the shortcoming of Cheng Tian You? Sun Yi said he treats Jiang Sheng too well. Wallace replied he hides his feelings well and waits for love. In short, he wastes his time. To explain further, Wallace even spoke a few Cantonese words, haha.

The host then asked about the kissing scene. Wallace replied they are all professional artists. In turn, the host asked which scene left them with a deep impression. Sun Yi said Wallace always made them laugh because his Mandarin is not really good. Wallace defended himself saying that he can speak fluent Mandarin with others but not her in order to make her laugh. In fact, Wallace’s Mandarin is really not good but better than a lot of artists from Hong Kong. Wallace continued to explain that he was trying to showcase Cheng Tian You’s deep feelings for Jiang Sheng to everyone. Sun Yi added actually Wallace was very serious when filming.

There is also a bittersweet plot on Cheng Tian You being blind. The sweet part is Jiang Sheng accompanying him and reading to him. The bitter part is when he chased her away before he became blind because he didn’t want her to know that he will become blind. In the gift exchange part, Jiang Sheng gave a bouquet of roses to Cheng Tian You to show her love. In return, Cheng Tian You gave a fur ball on the clothes to Jiang Sheng which played an important role for them to meet again. Wallace told the audience to watch the drama to find out what kind of important role it played.

The host proceeded to say that unfortunately the author of the novel Le Xiao Mi was not able to attend the conference because she has to take care of someone very important in her family who has fallen ill. But she posted her well wishes in Weibo.

After that, a video showing the effort by the director in selecting the filming locations and cast members was broadcast. The director Liu Jun Jie mentioned that he really put in a lot of time and care into filming this drama in the hope of bringing something different to the audience. In fact, he put in the most effort here compared to his other dramas. He was actively involved in all aspects of the filming from editing the script to selecting the cast including the child actors and to creating the music score. Since he and Wallace collaborated on My Sunshine before, he felt that the character Cheng Tian You fits him to a T. Then a senior personnel from iQiyi who watched a few episodes already, took the stage to praise the drama for depicting love during the youthful years.

Whether their blood and sweat will be paid off is for the audience to judge after the drama is broadcast. It will be great if the drama is well-received. But sometimes in life, you don’t necessary reap what you’ve sowed. If the drama doesn’t turn out well, at least appreciate the heart and hard work the production crew and the cast had put into it. If the drama is successful, everyone in the cast will benefit no matter how big or small a role he or she has. Let’s watch the drama and judge for ourselves whether the drama is a faithful adaptation of the novel, who has more screen time, if the plot flows well, if the filming was done well, whether the drama is any good etc. 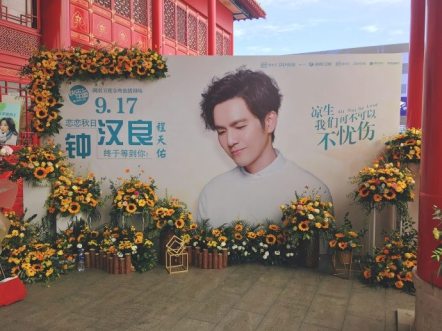 It is game time now, the most funny part of the conference. The four leads have to use body language to guess something related to their roles in the drama. Firstly, Alan has to figure out Sun Yi’s body language conveyed to Ray then Wallace. Alan guessed biting which is close enough to the answer, leaving teeth bite marks. I think his role in the drama likes to bite people to get their attention. Secondly, it was Sun Yi guessing Wallace’s moves. She complained that Wallace didn’t depict a mushroom well so she failed to guess correctly. Wallace asked her how to depict it properly. She showed him and he accused her of copying him, lol. With Wallace’s help, Ray managed to guess the persimmon tree depicted by Alan. Lastly, Ray didn’t depict the Eiffel Tower well yet Wallace managed to guess correctly with a tiny hint from the host. Such a smart man. He proceeded to show Ray how to depict the tower properly, heehee…..

By comparing with the real Eiffel Tower in the picture below, do you think Wallace’s depiction is spot on?

Before the conference comes to an end, a fan from each of the four leads will be the representatives to give a bouquet of flowers to their idols. The host said a sister was the representative from Wallace’s fan club. Wallace jokingly said she is in fact a grandma. Coincidentally she shares the same surname with me. Maybe next time will be my turn, lol. The fans declared their support for their idols and the drama. To thank them, Alan gave a Rubik’s Cube which he always played in the drama to his fan. Ray gave a packet of the noodles he cooked for Jiang Sheng to his fan. Sun Yi gave a packet of ginger (pronounced as Jiang in Chinese). Wallace gave a ‘sweet’ pomelo (pronounced as You in Chinese) to auntie Yang.

The conference ended with a group photo. 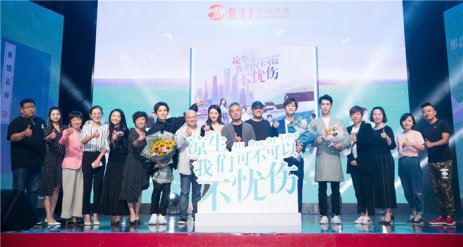 Lastly, I’ll leave you with your leisure time schedule for the month of September which is to watch All Out of Love everyday 😛

12 thoughts on “All Out of Love – Beijing Press Conference”